Blue Moon is an American-made Belgian wheat beer that has become popular internationally as a craft beer as well as in the States, where it is already loved thanks to the US beer engineers at MillerCoors. 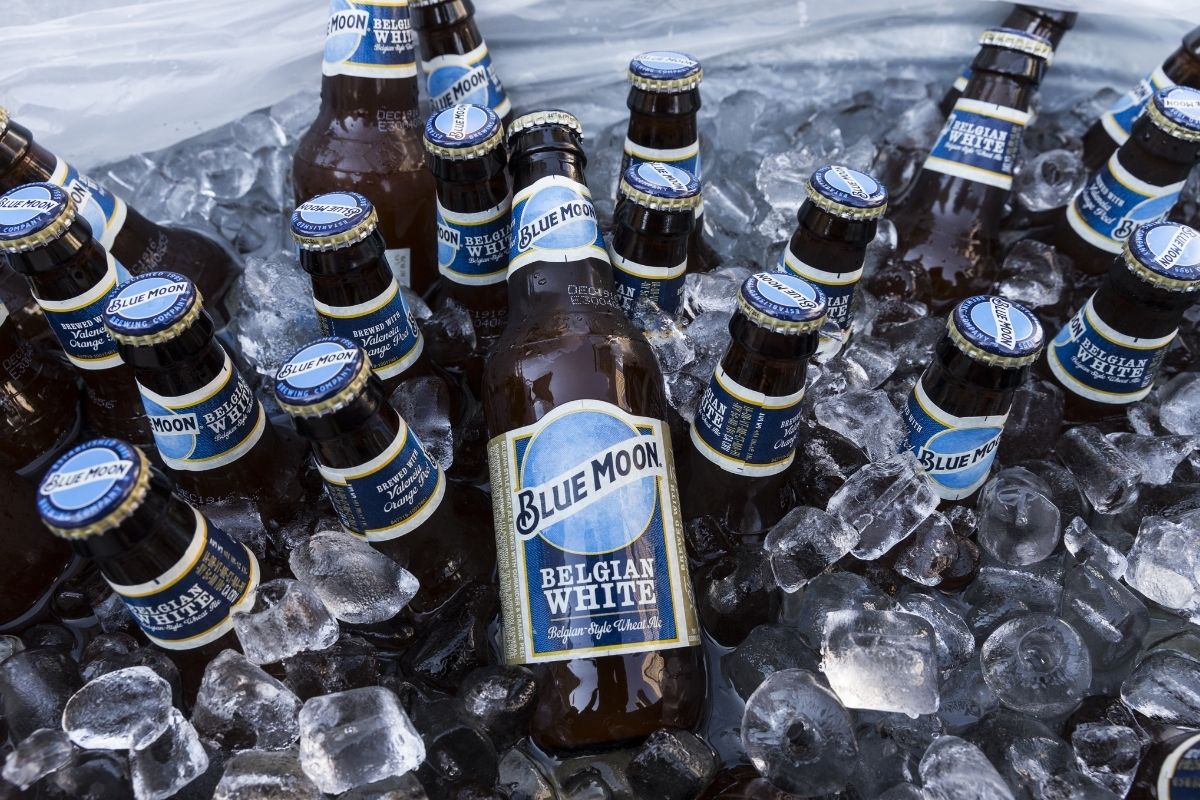 This is a good place to start if you are a skeptic, the same people who make Miller Light and Coors make this beer too!

If you like Blue Moon, but aren’t the biggest beer geek around, you may be wondering what kind of beer it is, where it gets its unique taste, and what other beers would be similar.

We're here to give you the answer but without the upsell of a barkeep, just a friendly suggestion. Keep reading to learn more about wheat beer, Blue Moon, and similar styles.

What Is A Blue Moon?

Blue Moon is an American beer, it is a Belgian wheat style beer. Of course with wheat beer, known as ‘witbier’ in German, the main focus is wheat.

Instead of dominating hoppy or grainy notes as an IPA may have, wheat beer has a more floral perfume notes thanks to the wheat.

But perhaps most pertinently with Blue Moon, is that elusive orange flavor. Blue Moon, when served from a tap, is often served with a slice of orange.

This throws many first time drinkers off but is actually really common, it helps to bring out the orange notes into the beer, this wheat beer is brewed with Valencian oranges and coriander to create the citrusy flavor you are likely to.

With this being said, Blue Moon is a great combination of citrusy notes and the more floral flavors that the wheat brings. Blue Moon generally comes in at 5.4% ABV which remains fairly high for the market.

In terms of mouth feel, Blue Moon is also recognized as having a pretty smooth creamy finish, there is almost not bad after taste, just a clean citrusy but smooth flavor.

What Other Wheat Beers Are Similar?

If you like Blue Moon, what you may be missing in your life is other wheat beers.

Wheat beers can be fairly unknown for the average beer drinker but are pretty accessible once you find one you like, like Blue Moon.

Here are some other wheat beers which are similar.

Allagash White is another very similar wheat beer to Blue Moon - we would say Allagash is probably cheaper but less popular, although many love it.

If you like Blue Moon, then you will like this beer too, you will either enjoy the mild change in flavor or find you prefer Blue Moon.

Allagash White has a very similar taste to Blue Moon, and is made in a similar fashion. Both are Belgian style wheat beers which focus on wheat and citrus flavors as the main focus.

Allagash, like the boys at Blue Moon, use orange peel and coriander, specifically curacao orange peel instead of Valncian orange peel, which provides a tangy citrus flavor.

Many customers find this beer to be a little more hazy and ‘spicy’ than Blue Moon, more flavor from the coriander is present and the citrus blends a little better with the wheat flavors.

If you prefer the orange flavor than go Blue Moon, this is a more nuanced and specific flavor.

One thing worth mentioning about Allagash is that it is slightly lower in ABV at 5.0% meaning it will be a little less sweet and obviously less alcoholic.

Of course, we would have to include a non-alcoholic alternative on this list.

CERIA is a great option if you have recently gone sober or just want to enjoy the flavors of wheat beer without the hangover or guilt.

Made in Colorado, the birthplace of Blue Moon, this wheat beer calls on many similar flavors. The main focus of this beer, like the last, is the citrus and wheat flavor relationship.

Moreover, this beer at CERIA is made by Keith Vila, the same brewmaster that made Blue Moon.

So if you are a sober drinker, and miss the taste of Blue Moon more than anything else, Villa has you covered with this beer which truly honors the flavor profile of his original creation.

Yet, Villa changed it a little, as to not create the same product, using blood orange peel instead.

The addition of blood orange peel can replace some of those lower, bitter notes that the alcohol can create, Villa is a brewmaster so there’s no doubt this non alcoholic beer rocks. 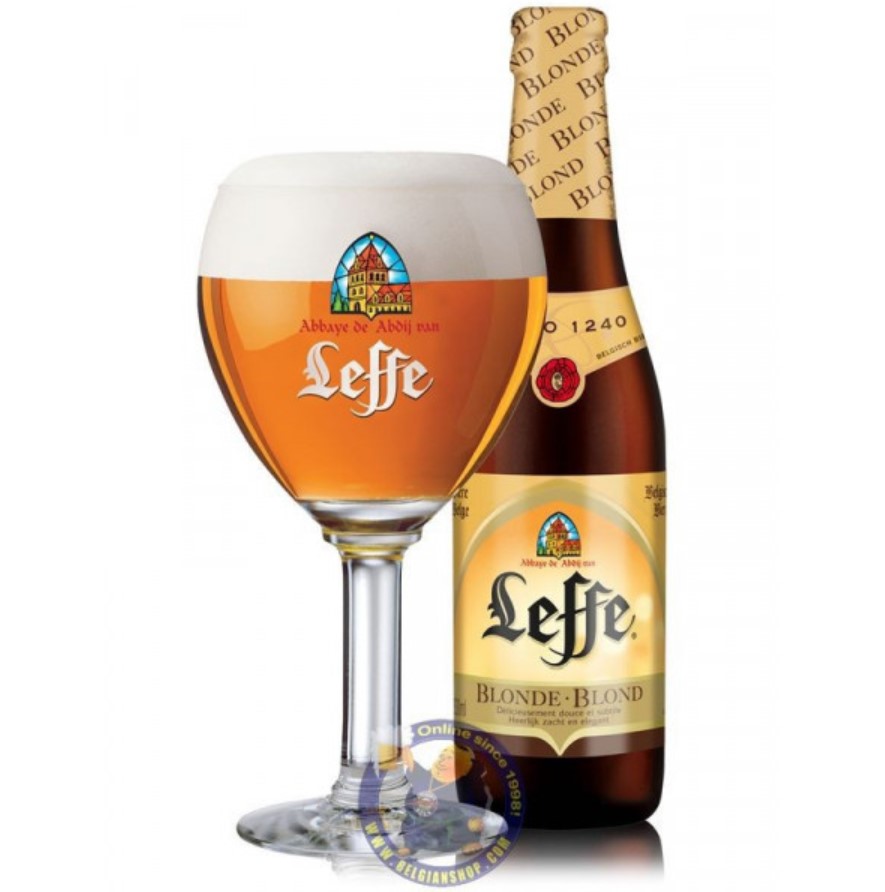 Maybe you are a fan of Blue Moon, but you want to delve more into that wheat flavor than simply the citrus elements.

If this is the case for you, then Leffe is a great beer to consider.

Leffe can be widely available in America, even though it is European made. Having been made since 1445, Leffe is arguably the beer which inspired the American Blue Moon.

Once again, orange or citrus flavors are present, but Leffe certainly keeps more of a focus on the wheat flavor.

Often served in a large gin-like goblet, the cloudy beer has a flavor profile that is generally really smooth, sweet, but also sour.

We feel that Leffe is a bit more nuanced so we would say give it a try if you like those wheat beers that are super cloudy and wheaty.

Leffe wins Belgian beer awards almost annually for how popular it is in Central Europe, one noteworthy difference is that Leffe is a very light wheat beer at only 4.9% which is lower than the rest of the market.

Other Beer Styles Which Are Similar

Now let's look at some other beer styles, not wheat beers, which have similar profiles to Blue Moon and wheat beer. 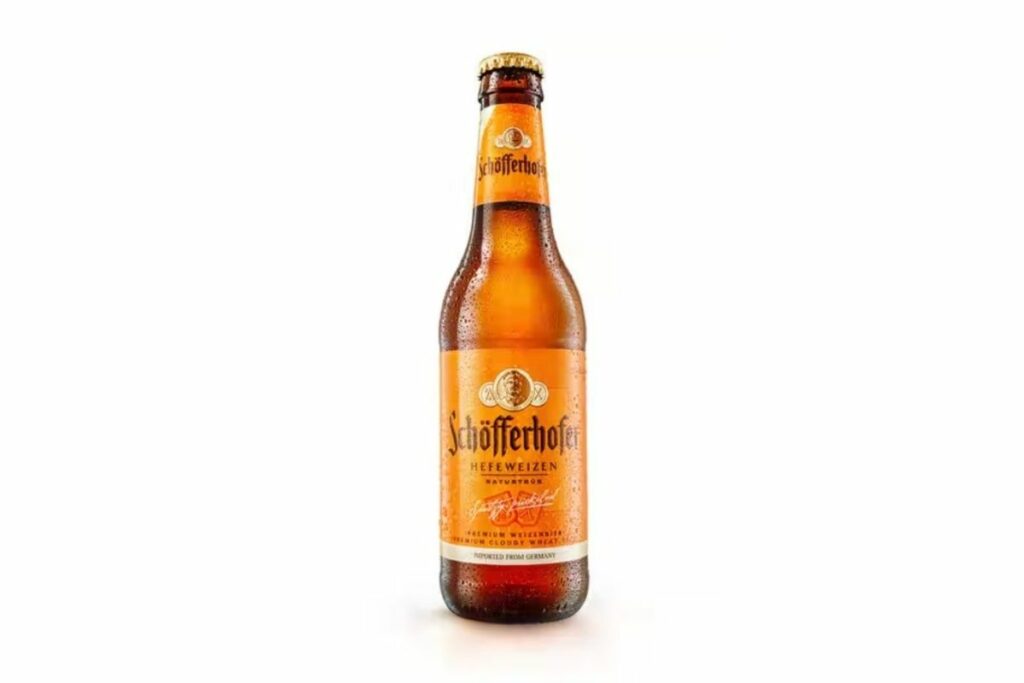 This beer is a similar style to wheat beer but offers something a little different to Blue Moon, but similar in style and profile.

Hailing from Bavaria, this beer is what you might consider a German version of wheat beer. Schofferhofer focuses on using wheat malt which is where the beer can get its fruity flavors from.

The general flavor profile of this beer is a little softer and banana-flavored than Blue Moon.

Some find that Schofferhofer perhaps lacks the sourness a wheat beer has, and which could be desirable in this beer, thanks to banana sweetness the beer remains much smoother.

The flavors work well in summer and at only 5.0% it should be sessionable in the Bavarian sun. 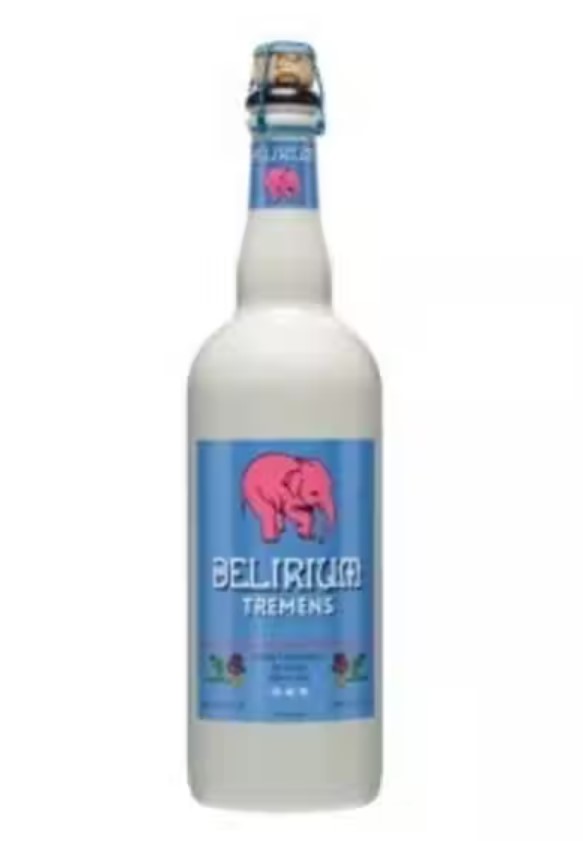 You may have seen this beer on the shelves in craft beer spots or just in that hip bar down the road, Delirium is an interesting and unique beer that still echoes the flavors in Blue Moon.

The flavor lasts a long time and sits on the palate, if you have an alcoholic ring you might get from doing a shot - this could be for you.

The style is known as ‘Belgian pale blond’ which isn’t super common.

For something bitter this is worth looking into, but there are also many fruity flavors going on.

Delirium is a strong drink that has a high alcohol content so is good for one or two of something special.

If you feel you have seen everything when it comes to beer, this may offer something new for you to chew over.

If the citrus element of Blue Moon is what you enjoy, then you may want to look into the very accessible world of IPAs.

With the IPA renaissance there are many different IPA styles out there to try, many unique and many run of the mill.

This one particularly has lots of pithy orange flavors like Blue Moon but also intrudes other citrusy flavors that really work well together, such as mango, papaya.

The hops and malt are there but are nowhere near as present as in Blue Moon.

The hops are where most of the citrus and fruity flavors come from rather than the wheat, a higher ABV can signify this may be a little more sweet than bitter like the wheat beers previously mentioned.

For a summer sipper with a citrus focus, this is a good one to consider if you like Blue Moon.

So there you go, Blue Moon is a type of Belgian wheat beer which is actually made in the US and was developed in Colorado.

Wheat beers are pretty similar in style most of the time and commonly come from Belgium.

This Belgian style has become popular, evident from the success of Blue Moon in the US, and isn’t too hard to find in your local stores.

IPAs and other golden ales are pretty similar to Blue Moon if you like that citrus element, there are many other German and Belgian beers out there which are also wheat forward as Blue Moon is.

CERIA, brewed by Blue Moon inventor Keith Villa is a great non alcoholic alternative to Blue Moon if that is the route you are going down, having invented the original you can trust this will be very similar, if altered a little to accommodate the low alcohol.

Andrew Carr
Hi, I’m Andrew Carr and I find beer fascinating. Not just drinking it (although that is a plus!) but everything about it. There is so much to learn - the fermenting process, the best glasses for each type, recipes to make at home… The list goes on!

I have been making my own beer for almost a decade now and I pride myself on my home setup. I’ve made sours, pale IPAs, stouts - you name it, I’ve probably made it in the comfort of my own home.

We use cookies on our website to give you the most relevant experience by remembering your preferences and repeat visits. By clicking “Accept All”, you consent to the use of ALL the cookies. However, you may visit "Cookie Settings" to provide a controlled consent.
Cookie SettingsAccept All
Manage consent

This website uses cookies to improve your experience while you navigate through the website. Out of these, the cookies that are categorized as necessary are stored on your browser as they are essential for the working of basic functionalities of the website. We also use third-party cookies that help us analyze and understand how you use this website. These cookies will be stored in your browser only with your consent. You also have the option to opt-out of these cookies. But opting out of some of these cookies may affect your browsing experience.
Necessary Always Enabled
Necessary cookies are absolutely essential for the website to function properly. These cookies ensure basic functionalities and security features of the website, anonymously.
Functional
Functional cookies help to perform certain functionalities like sharing the content of the website on social media platforms, collect feedbacks, and other third-party features.
Performance
Performance cookies are used to understand and analyze the key performance indexes of the website which helps in delivering a better user experience for the visitors.
Analytics
Analytical cookies are used to understand how visitors interact with the website. These cookies help provide information on metrics the number of visitors, bounce rate, traffic source, etc.
Advertisement
Advertisement cookies are used to provide visitors with relevant ads and marketing campaigns. These cookies track visitors across websites and collect information to provide customized ads.
Others
Other uncategorized cookies are those that are being analyzed and have not been classified into a category as yet.
SAVE & ACCEPT